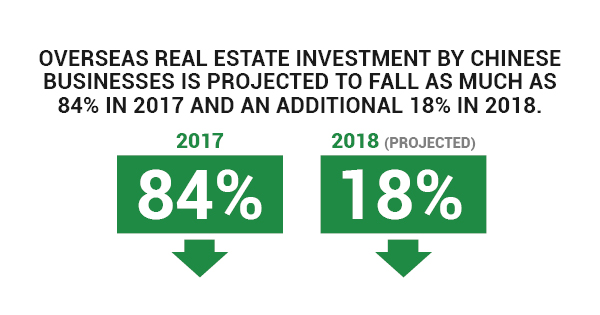 Not long ago, we wrote about the increasing role Chinese developers play in the Los Angeles real estate industry. But now, escalating tension between the Chinese government and the Trump administration could lead to less Chinese investment in the city.

It started when Chinese officials announced plans to further involve themselves in the overseas acquisitions and investments of Chinese companies. The move is part of a broader effort to repatriate funds, bringing them back within China's borders.

The reason for the new restriction, according to Bloomberg, is a course correction. After the global financial crisis, Chinese financial authorities expanded the available credit to a historic degree. What followed was a glut of investment and acquisitions in industries ranging from real estate to film production.

Now, the Chinese authorities are pressing their executives to sell their assets and refrain from any further overseas investments. The move could be destabilizing for many industries.

In fact, according to Real Deal, overseas real estate investment by Chinese businesses is projected to fall as much as 84% in 2017 and an additional 18% in 2018.

Now, President Trump is reported to be considering taking retaliatory measures against China. There are a number of motivators for Trump besides the withdrawal of Chinese investments, including Chinese IP theft, foreign steel dumping, and what the White House views as big-league inaction against the growing threat of a Nuclear North Korea.

Leaders from a wide range of industries fear that any retaliatory measure would lead to a tit for tat exchange between the two superpowers, which could have devastating and unpredictable effects on the U.S. economy.

For the many real estate investment companies Los Angeles, New York, and the nation in general boast, lack of access to cheap building materials and capital could significantly slow new development, exacerbating an already historic housing shortage across much of the United States.

But for Trump, who campaigned on the idea that he is a businessman and a deal-closer, a strong retaliation could give him a better footing in any future talks with Chinese leadership.

Real estate investment opportunities are popular in the United States, with 89% of investors at least considering adding real estate to their portfolios. But investors will need to pay close attention to this situation as it continues to develop.

Hubilu Venture Corp works hard to be the best among the many real estate investment companies Los Angeles has to offer. Call our experts today to get started.